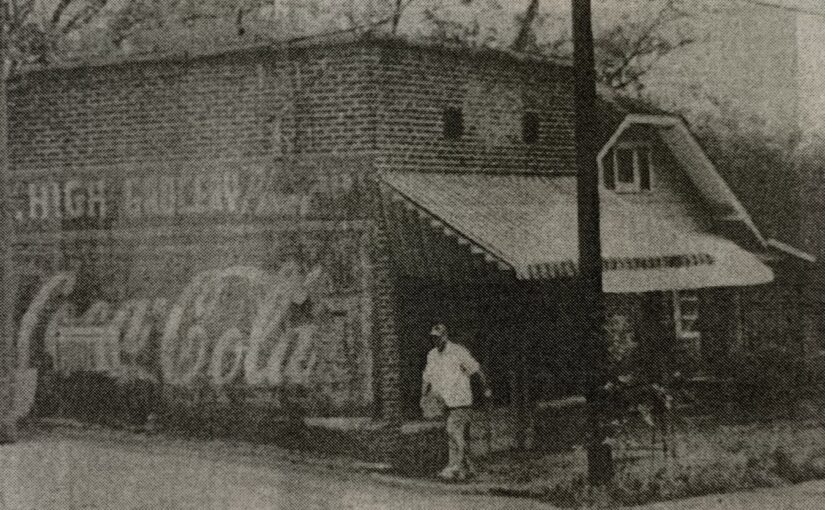 When the Buckley’s opened the store in 1932, there was no cafeteria at the school. The kids used to come in droves at lunchtime. And that is how Mrs. Bertha Buckley became known as the Hamburger Queen. Later, she was called grandmother, not only by scores of borders – mostly college students – she housed through the years. For the 20 years she ran Buckley’s store, Bertha Buckley sold hundreds of hamburgers a day to students at the old school on the corner of Lewisville and Greensboro streets. Later, when the cafeteria was opened, the school officials made a rule that the students could not leave the campus, so they would get one student to slip out and bring their orders. Mrs. Buckley started making hamburger patties at 7:00 a.m. The hamburgers were sold for a nickel. “Sometimes the kids were so jammed in there I thought that the walls would burst,” she said. Mrs. Buckley recalled her 20 years at the store with fondness. “I enjoyed every minute of it,” she said. Her days were long, often lasting 18 hours. “We always stayed open for the Starkville football games and did a brisk business then too,” she said.

Mrs. Buckley was born in Desoto where her father, Levi Rhodes, worked for the M&O Railroad. There were three boys and three girls in the family. After finishing 12 grades in the Desoto School at the age of 16, she attended Beeson College in Meridian for two years and passed the state teachers exam.

She taught second and third grade in Lauderdale, Clark and Simpson Counties, marrying Bishop Lyle Buckley, a bookkeeper in 1921. She continued to teach school there for several years until they moved to Florida, where her husband kept books for a firm in Haynes City for three years. They moved to Starkville in 1928 when Mr. Buckley accepted a bookkeeping job with Sanders Cotton Mill. He later worked for the rehabilitation department at Mississippi State College and then bought and ran a daily on [old] Highway 12.

Joe Buckley, one of her sons, who now resides in Long Beach, MS, recalls that his mother told the children about their arrival in Starkville in 1928. She said, “We stopped at a little country store on old Highway 12 to wash the dust off the children.” It turned out that the store was the old Livingston Store. We later bought the store and property on [old] Highway 12.

Mrs. Buckley continued to teach in the city schools after moving to Starkville. She went to school for seven summers and, although she never finished her degree, she received a lifetime teaching certificate. However, the $3 a day she earned as a supply teacher didn’t go far. She decided to buy the store, which was across the street from their home, to help support the family that by then included three sons. Their family later increased again when they brought her husband’s 4-year-old niece to live with them after her mother died.

Those were the busy years for the Buckley’s. Besides tending the store, she sewed for the children and was active in her church and community. The Buckley’s were members of the First Baptist Church and she taught in the beginner and primary departments for 15 years. She was a member of the Live Long and Like It Club and the Roundtable Book Review Club at the church and the American Association of Retired Persons. She was one of eight charter members of the Starkville Home and Garden Club and also belonged to the Starkville Home Demonstration Club.

Mrs. Buckley enjoyed handwork ever since her grandmother taught her to embroider when she was a little girl. In spite of two corneal implants, she still did embroidery, crewel, or cross-stitch.

After her husband died in 1951, Mrs. Buckley closed the store, but continued to rent the building to a variety of businesses. She worked as a secretary for one off the local justices of the peace and later as a secretary in a funeral home and did baby-sitting for many years.

A highlight of every weekday for her was riding the Pilot Club Mini-Bus to the Fellowship Food Center for lunch with friends.

I first ate lunch in Buckley’s Store in 1943. It was R.C. cola and a four-legged-daddy. But then you could get a hamburger for 10 cents and the R.C. was a nickel. You had to run like _ _ _ _ when the lunch bell rang to get to the store first so as not to stand in line. If late, you could be twenty minutes before being served by Mrs. Buckley. If you lost your quarter somewhere between home and lunch, you just went without lunch for Mrs. Buckley didn’t have credit.

During the late 1940’s when I was attending Starkville High School, I can remember visiting Buckley’s Store during recess. The students would flock there to buy cokes, nabs, ice cream and candy of all kinds. Ice cream was a nickel for a single dip and a dime for a double dip. Today, the outside of the store still looks the same as it did over 60 years ago.

I remember going to Buckley’s Store every Friday and getting the best old-fashion hamburger you ever tasted. It was just across the street from the school so if you didn’t like what they were serving in the lunchroom, you could go across the street and get one of those delicious hamburgers. Sonny Buckley, their son, was in my class.

Buckley’s Store was a gathering place for young people. We would go there and buy an R.C. cola and a four-legged-daddy (a package that contained four cinnamon rolls) and a hamburger.

I remember the Buckley’s lived down the street from the store and they had two sons who helped in the store at times. The store was open all day and back then most people walked everywhere. Many would just take a walk to the store and get a coke and a candy bar.

Buckley’s Store – A Neighborhood Store on Louisville Street, across from the Old Starkville High School, now the Greensboro Center. The Buckley’s were in business from 1932-1952.

A front view of the Grocery as it stands today.

The right side of the Grocery as it stands today – the Florist mural on this side has been changed to the above, and you can still notice parts of the hitching post near the back of the building.

The damaged and partially panted over mural – 2018.

The period-accurate Vendo 144 coke machine next to the original 1950’s Coca-Cola mural that has been partially restored.

The first time we found a phone number for Buckley’s Grocery.

The original Starkville High School across the street from the Grocery – originally constructed without a cafeteria – in 1927.